2017 has seen a surge in BioMix™ projects, especially throughout Central Florida. The upswing in EnviroMix installations in Florida has in part been driven by a Florida specific directive; utilities and private water companies are obligated by state requirements to eliminate treated wastewater discharge to surface waters and recycle a higher percentage of their wastewater than in most other states. This requirement to reuse water has an impact on the cost of delivering potable water to Floridians. Utilities such as The City of Orlando and Orange County have pressed BioMix into service to slash their energy costs and reduce the outlay on maintenance. Following detailed life cycle cost analysis, the independent engineering consultancy, AECOM, recommended the installation of EnviroMix’s BioMix solution at the City Orlando’s Water Conserv II Water Reclamation Facility .

“BioMix is 100% designed, produced and innovated in the U.S.,” says Dave Lauer, EnviroMix Director of Regional Sales. “The City of Orlando was attracted to our approach because they wanted to reduce costs and liked the idea of low maintenance mixing. They’ll be running what I describe as a ‘low touch’ system; lower energy costs and reduced maintenance demands means they are looking at a lower total cost of ownership”.

Water Conserv II is the largest reuse project of its kind in the world, combining agricultural irrigation with recharge of Florida’s primary drinking water source, the Floridan aquifer. As Lauer points out, an operation on this scale normally demands a sizable investment in mixing technology: “With this kind of wastewater treatment profile, a utility such as The City of Orlando might otherwise be using dozens of mechanical mixers as opposed to the two low pressure compressors they’re actually using with us”.

The mandate to recycle creates additional complications for water companies in Florida: wastewater contains high nitrogen loads which must be treated to very low concentrations. Without the appropriate use of denitrification processes, consumption of this water can lead to the health condition methemoglobinemia, which also goes by the nickname ‘blue baby syndrome’. Lauer explains: “At the Water Conserv II Water Reclamation Facility, our goal is to help our client keep the nitrogen concentration at as low a level as is technically possible. By relying on  BioMix to provide optimum anoxically mixed conditions, we can continue to reduce the already low levels of nitrogen produced by this facility by half.”

A secondary benefit of the EnviroMix system is that BioMix, which is integrated with a diffused aeration system, can allow the plant to change its operating mode from anoxic to aerobic merely by turning the diffused aeration system on or off. This feature provides the plant with increased process flexibility which is not easily accomplished by traditional mechanical mixing.

EnviroMix is making waves in Florida because customers recognize that BioMix is a viable technology for treatment plants that require nutrient removal, including nitrogen and phosphorus.  BioMix has proven to be effective in treating over 300 million gallons of wastewater per day.  For additional technical information about the benefits of BioMix visit https://enviro-mix.com/wastewater/biomix/.

Click the thumbnail below to see a short drone video of the Orlando Water Conserv II BioMix installation. 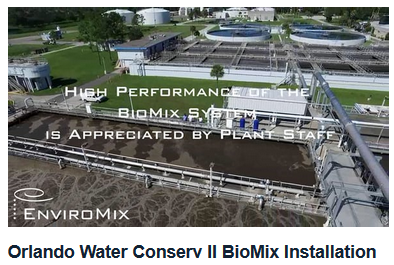